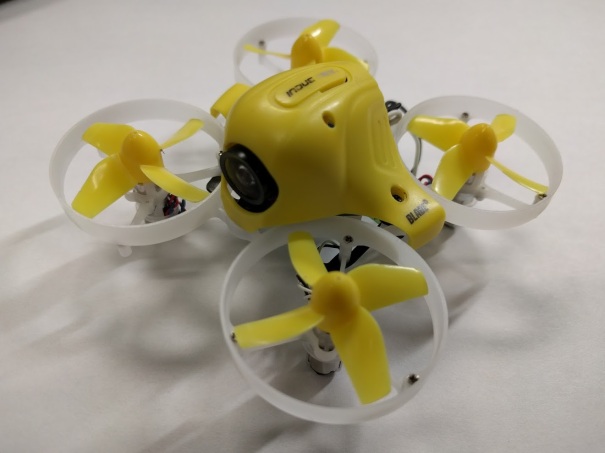 My whoop in its Delrin frame

When it was announced I was very excited about the Rakonhelin Delrin & Carbon Fiber frame.  I’ve personally cracked two different stock Inductrix frames, and were it not for E6000 glue and a carbon fiber brace, I probably would be constantly be buying stock frames.

But the brace is a bit clunky in the way – it just slips on – and I wanted a cleaner build.  So when I see this thing, I think that this looks great. The frame, according to Rakonheli, looks only to be about a gram heavier than stock and so I wouldn’t be gaining that much weight over my CF brace.  And while I’d been interested in their aluminum ones, I also have heard stories of them being very prone to bending on crashes.

So everyone knows – I purchased this on my own via Heli-Nation.  Twice.

So what does the $29.99 + S&H buy you?  It gets you a main frame made of the Delrin plastic, as well as motor struts made of the same.  It includes a carbon fiber brace that bolts directly to the motor struts, and has CNC aluminum motor mounts as well.  The motor struts come pre-assembled to the frame, and you also get a small bag of rubber bands, a generous amount of the world’s smallest screws, four rubber rings, and a collection of stickers that if you are like me will end up in the trash.

First thing was I had to put the motors into the motor mounts.  This process involves first inserting the motors pin-first into the struts themselves.

After that, you have to then slide the aluminum motor mounts over the motor and screw it to the motor struts.  This is where the process starts to break down.

You see, the motors are nice, strong magnets and those screws love them, and so often times I found these little 3mm ling screws attaching themselves to the motor, rather than going into the correct hole.

My kids did not learn any bad language through this process.  They already knew them from their mother.

What I discovered was it was actually easier to remove the struts from the main frame, and attach the motor mounts independently

The instructions do caution to prevent contact with the aluminum and the wires for the motor – I suspect that this to prevent damage to the wires.  The aluminum mounts do have a nice rubber cushion at the bottom.

Once motors were assembled, into the frame they went! 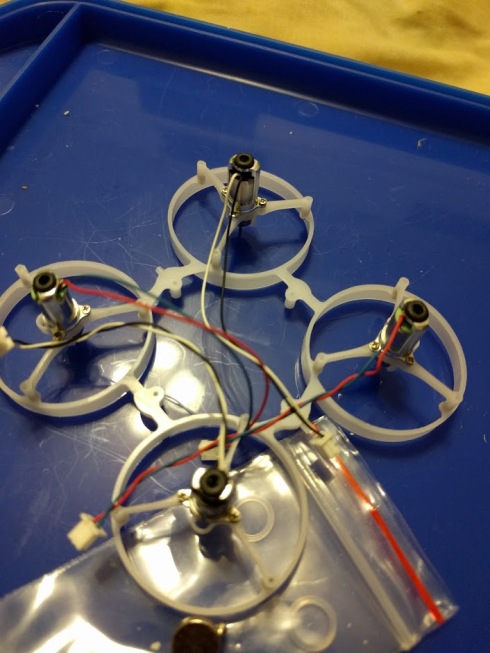 Once you have that complete, you next bolt the carbon fiber brace to the motor struts on the inside, with the outer rubber band hooks aiming to the outside.

Now at this point, I want to point out those side tabs.

If you’re not paying attention, are stressed, or have a lot going on around you, it’s really easy to get the direction screwed up and put your board & camera on wrong.  Believe me.

Once you have your motor on it’s pretty much downhill from there!  Board, camera, any canopy on, props, attach the rubber band and you’re ready to fly.  Hopefully.

The frame itself really is a clean, solid feeling build.  While I don’t have a scale, I figure it’s only about .6 grams heavier than my stock frame plus it’s brace.  Probably .4g if you count all the glue on the frame.  Not a bad trade off.  The integrated brace is a very nice touch.

It also, for me, has been crash resistant.  Shortly after assembling it with my new 17,300 kv motors, I was flying full tilt through the house when the doorway in my dining room lowered itself by about 15cm and the crash was spectacular to watch my house spiral like that.

The frame itself did not crack, but it was having issues taking off (only one side got elevation) and one of the prop guards was visibly warped. I was able to gently squeeze the prop guards back into place, and a wiggle of the motor mounts and I was back in the air.

Something, the motors or props I’m not sure, likes to rub.  I get a problem where one or two motors do not get enough thrust and the quad will not lift off.  A little wiggle though and they work, but after a crash that means even if I land upright, I often still have to retrieve the quad and fix it.  The propellers will often hit the side of the prop guard (from warping) or the screws themselves (from warping or being off balance).

There are also VERY tight tolerance for screws.  The reason I gave my Inductrix canopy a chop is my son lost a screw from it, and I was using a slightly larger screw to hold the board & vibration ring to the frame.  The stock frame took it fine.  However, in attempting to get my screw in, I ended up snapping part of the frame.

Fun diversion here:  In the course of trying to source a replacement main frame, I could either pay $15 to Rakon and have it in a week or two, and I think about $40 and have it in about 3 days.  I actually went back to Heli Nation and got a whole frame in three days.

Quality also seems to be inconsistent.  A user named Jason from the Tiny Whoop Facebook group has ran into some issues – first, holes for a screw not drilled all the way through.  In addition, on impact he did not have as much luck as I have.

Another user, Sean, reported that his quad now struggles to get much elevation at all.

My personal biggest pet peeve is the rubber band for the battery.  It shifts far too easily, especially on impact, causing the center of gravity to shift dramatically.  It is also difficult to get consistent battery placement, meaning you either are constantly adjusting your trims with every battery or just suffering through it.  I’ve had more that one crash where when I flew the quad back to me the battery was dangling by its pigtail.

This $30 alternative frame looks pretty slick and provides a very clean build.  But it is very complex, making a lot of simple maintenance and swap jobs much more of a chore. The plastic seems very fragile, and the aluminum motor mounts are a pain to install.  Above all, the issues with propellers impacting the frame and the battery shifting so easily make flying inconsistent.

Save your money, reinforce your existing frame with glue, buy a CF brace, and move on.

So I saw a few other people on the Tiny Whoop group making comments about they had better luck with loosening the screws between the motor arms and ducts.  Let me say – that did not end well for me.  After a crash, it bowed in (as expected) on a propeller, causing it to sheer in.  In addition the crash caused the battery to come out and was yanked hard enough to actually damage the connector on the battery.

Stay away from this frame.

Quick About
A complete novice to electronics, drones, and pretty much all things RC with OCD has thrown himself head long into FPV freestyle and racing!